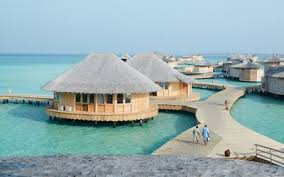 The Maldives, officially the Republic of Maldives, is a small country in South Asia, located in the Arabian Sea of the Indian Ocean. It lies southwest of Sri Lanka and India, about 1,000 kilometres (620 mi) from the Asian continent. The chain of 26 atolls stretches from Ihavandhippolhu Atoll in the north to Addu Atoll in the south. Comprising a territory spanning roughly 298 square kilometres (115 sq mi), the Maldives is one of the world’s most geographically dispersed sovereign states as well as the smallest Asian country by land area and population, with around 427,756 inhabitants. Malé is the capital and the most populated city, traditionally called the “King’s Island” for its central location.

The Maldives archipelago is located on the Chagos-Laccadive Ridge, a vast submarine mountain range in the Indian Ocean, which also forms a terrestrial ecoregion, together with the Chagos Archipelago and Lakshadweep. With an average ground-level elevation of 1.5 metres (4 ft 11 in) above sea level, it is the world’s lowest country, with even its highest natural point being one of the lowest in the world, at 5.1 metres (17 ft). Due to the consequent risks posed by rising sea levels, the government pledged in 2009 to make the Maldives a carbon-neutral country by 2019.

Welcome to tropical island of Maldives. On Arrival meet & greet with our representative and get transfers by speedboat to your hotel. Check in at the hotel. Spend the day at leisure and enjoy the views of crystal clear waters and sandy beaches. Overnight at the hotel.
Meal Included
LunchDinner

After breakfast at the hotel, day is free for leisure to enjoy on your own or you may choose water sports activities like Catamaran sailing, Windsurfing, Parasailing, Jet Ski Tour, Fun Tube, Water Skiing and many more. The same can be booked while or after booking the package with Travkart.com. Overnight at the hotel.
Meal Included
BreakfastLunchDinner

After breakfast at the hotel, day is free for leisure or you can take a sun bath on the beach, go for a swim or relax at your hotel room. Overnight at the hotel.
Meal Included
BreakfastLunchDinner

After breakfast at the hotel, day is free for leisure we recommend you to pamper yourself with an indulgent spa treatment. Choose from a relaxing aroma therapy treatment or a rejuvenating body spa wellness package. Overnight at the hotel.
Meal Included
BreakfastLunchDinner

After breakfast at the hotel, day is free for leisure. Enjoy the day at on your own. Overnight at the hotel.
Meal Included
BreakfastLunchDinner

After breakfast at the hotel, check out from hotel @ 12:00 hrs and proceed to Maldives airport for your onward journey.
Meal Included
Breakfast